The Powder Coating Institute honored Hani Azzam, a powder coating pioneer who has made major contributions to the powder coating industry, with a PCI Hall of Fame Award at the 2006 PCI Annual Meeting, May 23rd, 2006, at the La Quinta Resort, in La Quinta, CA.

Hani Azzam was introduced by newly elected PCI Secretary-Treasurer Chris Merritt of Gema USA, who gave a detailed account of Hani’s career and accomplishments in the powder coating industry.

A Founding Member of PCI in 1981, Hani Azzam was an effective promoter of powder coatings in the early years, and helped attract new members to PCI during this period.

He was one of the pioneers of electrostatic powder coating application, bringing the Gema application equipment line to the U.S. in 1969. He served on the PCI Board of Directors from 1981 to 1983, and has been a participant in PCI and the technology of powder coating for over 30 years.

Upon receiving a special plaque from Merritt and PCI Executive Director Greg Bocchi, Hani gave a moving acceptance speech, relating how 58 years ago he immigrated to America looking for a better life, and found it to be “a land of opportunity.” He said the powder coating industry was “a lonely business” in the 1960’s, and that it is “A great honor and privilege to be here to celebrate PCI’s 25 th anniversary,” and fortunate “To be among people who have contributed so much.”

The PCI Hall of Fame Awards recognize individuals who have made outstanding contributions to the powder coating industry and given many years of dedicated service to The Powder Coating Institute.

In addition to the distinctive plaque presented to those honored, the names of PCI Hall of Fame honorees have been etched onto nameplates of a special PCI Hall of Fame wall plaque on display at the PCI Office.

Previous inductees from 2002, the inaugural year of the awards, are Ron Farrell, Sam Dawson, John Brvenik, and Gordon Cole; and Doug Richart and Chuck Johnson from 2003; Bob Warner from 2004; and Bob Korecky from 2005. 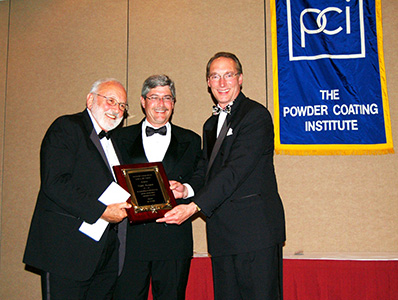