The Client
A major US manufacturer of commercial and residential lighting fixtures.

The Challenge
This was an especially complex project. Working with the client, the engineering department came up with several design innovations to tackle the following specific challenges: 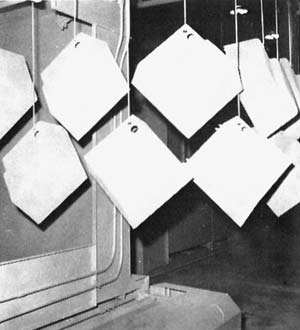 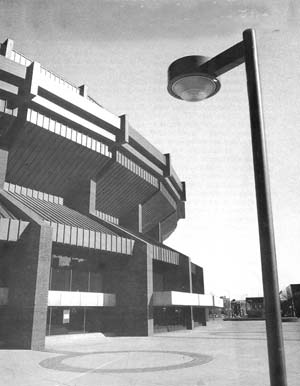 The Solution
Initially the client considered installing an entirely new finishing system, including a new washer and oven as well as the powder application system that would be erected in a new building add-on. Instead, the existing liquid paint line was converted utilizing their existing washer and ovens. For the powder coating system the client selected the twin-air-belt system which would not only accommodate their multi-color system and conserve space but the new quick-change belt design would make color change relatively easy.

Next was confronting the space limitations. The new powder system would be placed in the same space occupied by the old liquid system. Since there was no space for the complete system on the same floor, the engineers decided to look up and designed a plan so that the exhausters for the system’s two automatic spray booths would be located on the roof of the building. This innovative idea accomplished two things: noise levels inside the plant were greatly reduced and it eliminated the need for subfloor cabling which would have been required if they had to tear up the floor slab to route electrical cables and powder supply hoses.

Although this approach saved money, it was not without its problems. The finishing line could not be down for more than two weeks and that was the time allocated for tearing out the old liquid system and installing the new powder application section. Careful planning and preassembling as much of the equipment as possible, the client, assisted by the supplier’s service personnel, met his deadline. The system was fully operational at the end of two weeks.

Benefit to Client
With two new powder coating systems in both plants, the client estimates that the overall cost savings will exceed his original projections. The advantages of the powder system installed were:

Conclusion
The results of the new powder coating system speak for themselves. We were able not just to achieve the client’s requirements, but exceed them: coating products with a superior finish applied at a lower cost; improving utilization of the coating material by 50+%, complete compliance with environmental regulations; and eliminating VOC emissions. The added bonus was a clean paint line that made housekeeping a cinch!