In 1968 Hani Azzam was working on a government project jointly run by the US Navy and Bell Laboratories in Germany. He did not go there looking to discover a solvent-free coating process, but that’s what he found. Nearly by chance, he was introduced to the concept of “electrostatic powder coating” during a meeting. An accomplished young engineer, Hani was managing his own division and on the way up in his company. But the idea of powder coating possessed him and he decided to start his own company promoting this process — one which was largely unknown in the market. The broad range of possibilities promised by the process made the trials and tribulations of starting a new company seem worthwhile. Besides, it was a dream, a challenge.

In 1969, no one in the United States knew much about powder coating, a method by which electrically charged powder coating material is spray-applied to a grounded metal work piece. Electrostatic attraction helps direct and hold the powder to the part being coated until heat is added to flow the powder together and cure it to form a durable, high quality finish. Hani started his venture by writing position papers, giving lectures and crisscrossing the country to demonstrate the concept to potential customers. It was hard work, but patience and persistence eventually paid off. In collaboration with several partners, Hani successfully incorporated Interrad Corporation, which later became Modean Industries, Inc.

Spring forward to 2009: Powder coating has become the standard by which all other coatings are judged. But that is only the beginning. Powder coatings now play a critical role in our environmental efforts and are key to our sustaining a “green” culture throughout the world. In addition to its many uses, powder coating’s utilization in the renewable energy field, such as with solar and wind power, is adding to the enormous growth and potential of those markets. In fact, powder coating’s ability to provide long life under harsh outdoor exposure has allowed the solar industry to expand into new fields such as outdoor lighting and other unique applications.

Lighting Fixtures and Gas Cylinders are Powder Coated automatically. Powder Coating is pollution free. Up to 99% of powder overspray can be captured and recycled. It complies with water and air pollution control regulations

Majoring in mechanical engineering with a focus in thermodynamics and heat transfer, Moneer Azzam’s primary goal when he graduated from college in the early 1980s was to launch a career in the renewable energy business. It turned out to be a circuitous route. Moneer first worked in the nuclear energy field, then moving to radar before landing a job in photovoltaic (solar electric) panel development. Eventually, the lure of starting his own enterprise became too irresistible and he set off to start a business that develops complete solar powered products serving high-value applications. What possessed Moneer to leave the comfort and security of his job to start his own company? His strong belief in renewable energy and his dedication to its advancement fueled him to persevere and establish his company, SolarOne Solutions.

Today, SolarOne Solutions (solarone.net) transforms the power of the sun into effective and reliable off-grid solutions. It deploys its SolarOne® Lighting Systems, SO-Bright™ Lighting Control Technology and Harvester™ systems across the globe for a wide range of applications and customers, including major college campuses, government laboratories and municipalities. SolarOne lights operate independently of the electric grid, relying on a solar panel for their single power source. This ensures that the lights remain lit, even during grid-connected power shortages. Their independent power source additionally enables them to be sited flexibly and installed without incurring the expense of trenching and repaving. SolarOne Solutions’ utilization of long-life powder-coated components makes possible the production of overhead lights for roadways, pathways, sidewalks, parking lots, and bus shelters.

Another of SolarOne’s inventions, the Harvester™ Micro-Utility System platform, is optimized for micro-utility applications, providing water purification, lighting, remote power, and wireless telecommunication. The system has been used in settings that range from a coffee cooperative in Tanzania to the military theatre in Afghanistan; from hurricane relief efforts in Haiti to street concerts in Boulder, Colorado. Again, powder coating played an important role in this product’s ability to operate in such a wide range of environments.
As with most small businesses in “cutting edge” technologies, the history of SolarOne® Solutions Inc. revolves around perseverance, flexibility and the development of creative solutions to complex challenges. The company started as a joint venture orchestrated by Moneer between a major corporation and a state agency. Moneer acquired the resulting corporate entity and brought on angel investors along with talented, dedicated staff. Ultimately, through venture backing, the company has developed into a fast-growing corporation guided by a board of veterans in the lighting, LED, and high tech industries. In 2008, SolarOne expanded its manufacturing and administrative facilities in response to its growing business and the burgeoning market for its products. 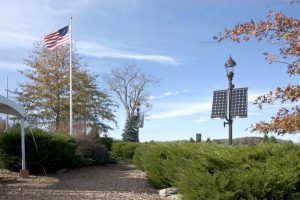 Several components of Solar Lights are Powder Coated for durability in outdoor exposure as shown in Solar Lighting Installations at the Woodstock Monument in Bethel Woods NY and Fairleigh Dickenson University in Hackensack, NJ

Following a post-graduation tour of Europe and North Africa, Dean Azzam returned to the US eager to find work. He first landed a job in consulting engineering, then joined a utility company as an applications engineer working on energy and utility cost-saving strategies with large commercial, municipal and institutional customers. A primary focus of his work became thermal storage systems involving client operation of cooling systems during the night, hours when electricity is more plentiful and rates are much lower. Dean excelled in his position and was rapidly promoted to manage the group.

The company Dean eventually founded, Aztech Engineers Inc. (aztecheng.com), is a mechanical, electrical, fire protection and plumbing engineering design firm. Having recently been named Engineer of Record for the largest photovoltaic system on the East Coast and having designed two of the largest geothermal heat pump systems in Connecticut, Aztech Engineers has now established itself as a leader in innovative energy savings and renewable energy generation projects for buildings.

For Eastern Connecticut State University (ECSU) in Willimantic, Connecticut, Aztech Engineers was selected to design the mechanical, electrical and plumbing systems when ECSU decided to renovate its high-rise dormitory. Originally, the building had been heated with electric resistance and was not cooled. ECSU wanted to simultaneously add cooling and improve the building’s energy efficiency. Aztech Engineering recommended a geothermal heat pump, a system which uses the naturally-occurring free energy below the earth’s surface to improve the efficiency of heating and cooling, as an approach that could meet both these objectives. Although the building was considered large for such a system at the time, Aztech was confident that geothermal was the right solution. ECSU showed foresight and the project went forward. Once the system had been completed, ECSU was able to heat and cool the dormitory at a substantially reduced cost. The risk was more than worth it.

Having shown its ability to take on cutting edge projects such as ECSU’s, Aztech moved forward to gain expertise in photovoltaic systems. Today Aztech has become one of the leading firms providing inspection services for the Connecticut Clean Energy funds photovoltaic incentive program. 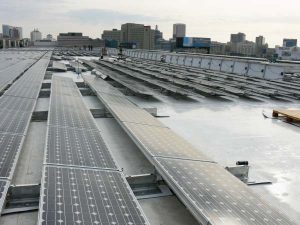 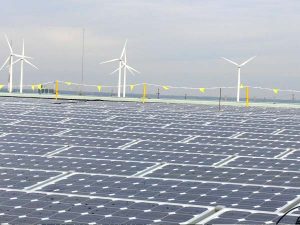 These three men clearly share several traits, including; an entrepreneurial spirit, a passion for clean and renewable technologies, the same last name and with it the same humble origins. In the late 1950s, Hani was a Palestinian refugee, homeless and with an uncertain future, but he sensed there was a world of opportunity waiting in the United States. He was willing to work hard and take risks. He did and, eventually became a naturalized American citizen. Moneer and Dean are Hani’s two sons, both born and raised in the United States. Both of them leaving the comforts of a stable workplace, to pursue their dreams and take on the challenge of being entrepreneurs pursuing cutting-edge solutions is the recurring theme of their stories, personally and professionally. Through its despair, the Diaspora has a way of sculpting the character traits needed to solve very difficult problems. America’s system has a way of nurturing those very traits, allowing them to surface into positions of leadership.

Writing for the Economist in its March 14-20, 2009 special report, journalist Adrian Wooldridge says:

For all its economic woes, America remains a beacon of entrepreneurialism. Many of those small businesses rapidly grew big. America was the first country to ditch managerial capitalism for the entrepreneurial variety. An army of such variety exposed the shortcomings of the old industrial corporation and launched a wave of entrepreneurship.

America has found the transition to a more entrepreneurial economy easier than its competitors because entrepreneurialism is so deeply rooted in its history. It was founded and then settled by innovators and risk takers who were willing to sacrifice old certainties for new opportunities. They are comfortable with the risk taking that is at the heart of the entrepreneurialism.

The story of this family’s pursuit of their entrepreneurial dreams in America is testimony to Mr Wooldrige’s hypothesis. Where else in the world can people like Hani Azzam so readily emerge from the most desperate of situations, not only to establish a new life, but to take on the most daunting challenges that confronts the world today?